Those who have been following Vibes from the very beginning know that it is my big dream to get to South America once and see its magical cloudforests, their fascinating wildlife and to experience the lifestyle that is so unlike our European one. Even though I still have to wait a bit for that to come true, books are always there to take me to faraway places. This month it is Isabel Allende who takes us to Chile with one of the most famous novels of South America, The House of Spirits. 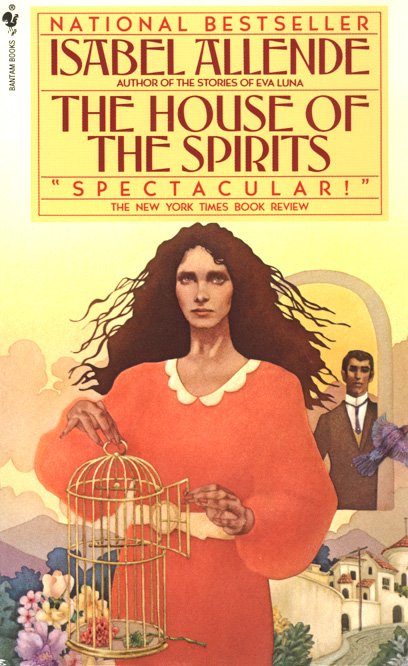 The House of Spirits is a family saga, telling the tale of a selfmade man, Esteban, and his descendants over two generations. The story is glued together by Esteban’s figure who became wealthy by restoring the family’s farm with lots of hard work and strictness of his workers. However, this prosperous figure has dark misdeeds in the background – Esteban rapes women and abandons them with his bastard children and in addition he violently holds onto his power while preventing his workers from having any of that.

On the surface the book does not fulfill the sense of justice of the reader: whatever cruelties he commits, Esteban keeps on getting wealthier. However,  if we read beneath this surface, we shall see that the author sends a powerful message: wealth alone cannot bring happiness if someone lacks love in his life. Esteban’s wife and daughter are never as powerful or rich as he is but despite their hardships, they have people to love and who love them in return. Esteban remains lonely and miserable even though he is surrounded by a wonderful family. He cannot accept that his son wishes to sacrifice his own life for the help of others, that his other son would renounce his fortune in the name of spirituality and that her daughter falls in love with someone below their position. He does not care about his children’s happiness, he is only interested in saving his reputation and his conduct results in them turning away from him. He is only redeemed towards the end of the novel when he finds love in his heart for his granddaughter and finally places her interest before his own.

Then, it is clear thruoghout the novel that Allende is an author who is very much aware socially. She depicts how ignorant and careless society can be and how it can sway the tracks of people’s lives in the wrong direction with meticulous care. For example Allende illustrates how traditional roles bereave women of their freedom and indepence through the life of Esteban’s sister, Férula. Férula could never build a life for herself because as the woman in the family she has to take care of their sick mother. As a consequence, she could not go to work or marry, nor have an income which after the death of the mother made her dependant on her brother.  Another example for such injustice is how Esteban rapes women but refuses to support his bastards. Furthermore, it may not be obvious at first glance, but Allende subtly serves justice as Esteban’s wrongdoings repeatedly come back at him. His sister curses him and  his bastard grows up to be a troublemaker, a violent man who ends up hurting his grandchild, the only person Esteban cares about.

Lastly, it is no wonder the novel became a national bestseller. Not only do its twists and characters make sure the reader keeps on reading, Allende’s message is also educational. Generations come and go throughout the novel but this message remains: “ The greatest thing you’ll ever learn is just to love and be loved in return.”