The abundance of leaves hitting the ground officially announced the arrival of autumn and I am plunging myself in it with ginger tea by my side, the curtain pulled and a detective novel in my hands. Budapest Noir by Vilmos Kondor was made to be read this time of the year as its dark theme and mysterious atmosphere perfectly matches the overcast sky and the fog that covers the city. 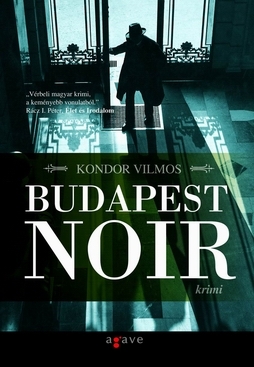 The book is about the death of an educated Jewish girl who-it turns out – had been a prostitute. The police does not investigate as they are busy with making sure everything on the funeral of Gyula Gömbös will go as planned. Luckily, the main character – Gordon, a crime journalist takes matters in his own hands and starts looking for the reason behind this girl’s untimely death.

The title tells a lot about the book: The events take place in Budapest which is depicted with so much attention like an extra character of the novel. As we follow Gordon’s journey we are told exactly which street he is in or which tram he hops on. And this sense of place animates the whole novel: I can see our protagonist in his long detective coat with a hat on, walking on Andrássy Street with a dedicated expression on his face, while being deep in his thoughts about the dead girl.

The other part of the title refers to the genre of the novel. Noir by definition is closely related to “hardboiled genre (a sort of crime fiction) with a distinction that the protagonist is not a detective, but instead either a victim, a suspect, or a perpetrator. A typical protagonist of noir fiction is dealing with the legal, political or other system that is no less corrupt than the perpetrator. “ And as we get involved deeper and deeper in the novel, we see how corruption overflows every layer of society of Budapest.

Lastly, even though the novel made me read on chapter after chapter, the end falls a bit flat. Presumably that could have been avoided by focusing more on the victim’s and the perpetrator’s character and less on showing the reader how dedicated Gordon was. However, putting this aside, I would recommend the book as a fast read which takes you on an adventure in a special period of Budapest like a movie.

P.S.: The book has been adapted to the screens and premiered on the 17th of October so if the review made you curious about the book but you do not have time to read it, you can watch it now in the cinemas! (Budapest Noir (trailer) from Hungarian National Film Fund on Vimeo.)