Italian scooter Vespa which manufactured by Piaggio celebrated its 70th birthday this year. The word Vespa means Wasp in both Italian and Latin. More than 18 million scooters have been sold worldwide since it was first launched in 1946. Over time Vespa has become synonymous with style and freedom also thanks to a number of great movies, such as the La Dolce Vita – masterpiece of Fellini -, and Roman Holiday featuring Audrey Hepburn & Gregory Peck. The Vespa was inspired by the small olive- coloured Cushman Airborne motorcycles that were designed to be dropped by parachute with US Army Airborne Troops during WWII. Piaggio was founded in Genoa in 1884 by Rinaldo Piaggio as a luxury ship building company that expanded into producing rail carriages, automobiles, marine craft and later aeronautics. In 1917 Piaggio built a new plant in Pisa and, four years later, took over another in Pontedera to build high-tech P-180 engines for bombers. During the WWII, Piaggio’s aeronautical plants became strategic military targets and in 1943 they were destroyed by allied aircrafts. The factories were rebuilt and Enrico
Piaggio (son of Rinaldo Piaggio) assigned Corradino D’Ascanio (who had previously designed the first Italian helicopter) the task of designing a motorcycle suitable for getting around the bomb-damaged Italian cities. D’Ascanio who was a real genius – he played violin, embroidered and did crochet – hated motorcycles, he found them too bulky, dirty and unreliable, so he wanted to create a two- wheeled vehicle that didn’t feel like a motorcycle. Surprisingly, he used parts originally designed as bomb components and left-over wheels from aircrafts.It is said that when he showed the prototype, it was Enrico Piaggio, who named it la Vespa, because of its narrow waist and buzzing sound. (The first name was MP6). The first time the public saw the Vespa on the cover of the Italian magazine La Moto on April 15, 1946 and, following this, it was launched at the 1946 Milan design fair. Luca Capocchiano a mechanical engineer from Genova has fulfilled his dream by touring around the world with his 40 year old Vespa 125 in 2015. 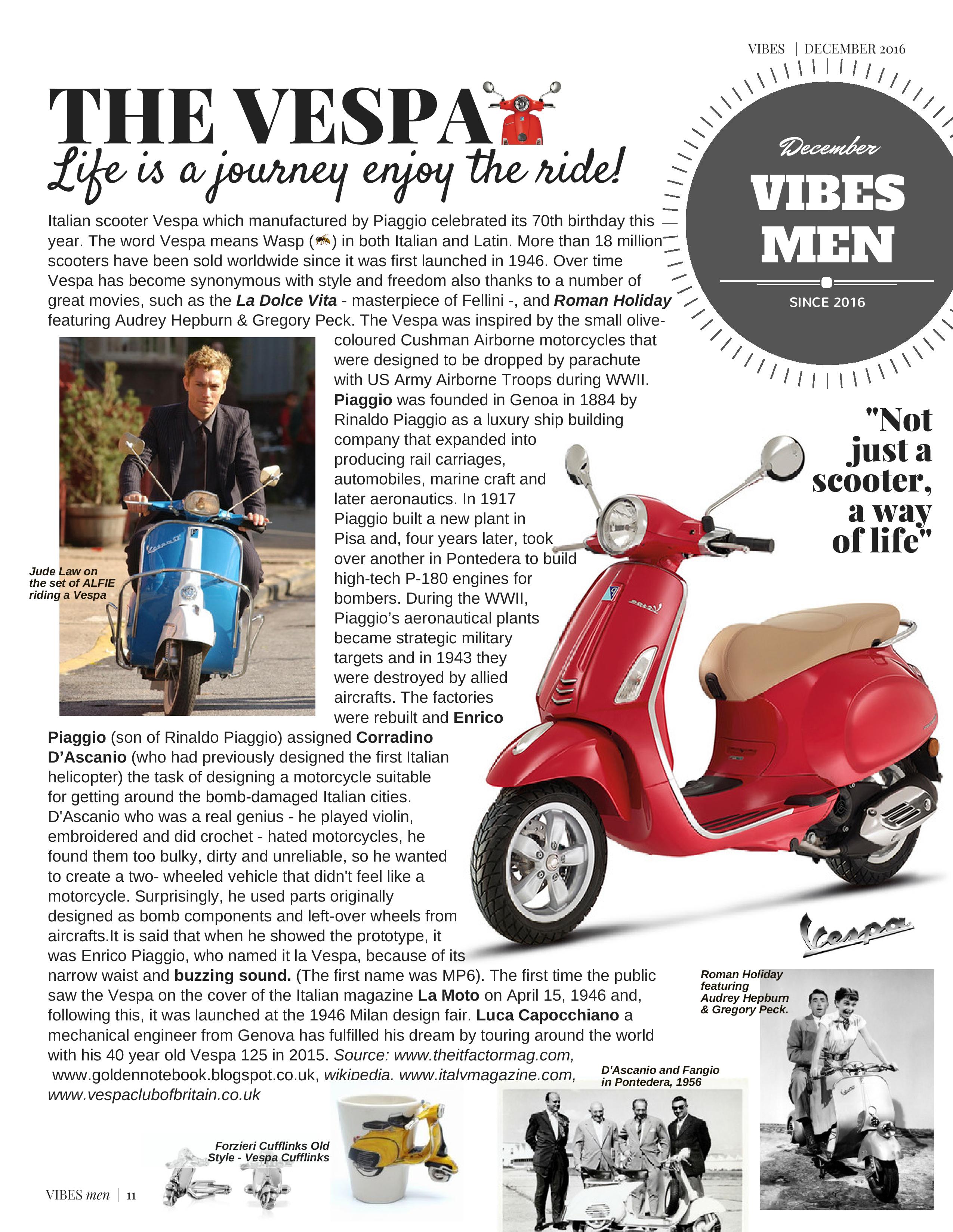