Hand Gestures Around The World

Vibes will show you some “do not”-s !

Most of us we use this hand sign to indicate everything is all right but in certain countries like in Brazil this is an insult, a particularly rude gesture.

Peace and love in some countries but believe or not, in the UK it is one of the rudest insult when displayed with the palm inward towards the signer. During the 100 years war the French would cut off the middle and index fingers of any English bowman so as they could never shoot again. The English would taunt the French by showing their fingers, so as to say “I can still shoot you”.

It’s better not to hitch-hike in Iran in the same way you used to do it in Europe as they consider thumbs-up as an insult. The sign is called bilakh. Unfortunately for the Western world, this sign is the equivalent of th “ok” sign and is often misunderstood and mistaken for the wrong thing,

In some countries means simply: “come here” in other countries it is considered insulting to ask someone to come towards you like this. In the Philippines this gesture is liable to arrest as it is used to call dogs and prostitutes.

If you don’t want to get in trouble in some countries like in Greece, Japan or Pakistan it’s better not to show your palm to someone, as they interpret it as an offensive gesture.

When you hand something to someone (gift, business card..etc..) always use both hands as using only one is considered impolite.

In Muslim countries the left hand is considered impure. It’s better not to eat with your left hand in Malaysia, especially if you are eating from a common plate. Even if you are left-handed! Sorry! 🙁 🙂

The “fig sign” is either a wonderful good luck charm or the worst insult you could ever give someone. In ancient Rome, an image of a hand in the fig sign (mano fico) was worn as an amulet to protect against the evil eye. In modern Portugal and Brazil, many people still wear fig sign trinkets as jewelry.

In places like Indonesia, China, Russia and particularly in Turkey, the sign can have an insulting meaning roughly equivalent to “screw you”.

In the US this is a game that parents play with their children. They call it “I stole your nose”.

Don’t touch a Thai person’s head or ruffle their hair. Apologize if you accidentally touch somebody’s head. Of course there are some exceptions but as a Westerner it’s best not to do it to avoid getting in trouble.

Snapping the fingers over and over can mean the person is trying to remember something he or she has forgotten. In some countries finger-snapping is offensive, especially when fingers are snapped close to an other person’s face. In Latin America, a finger snap often means “hurry up!” 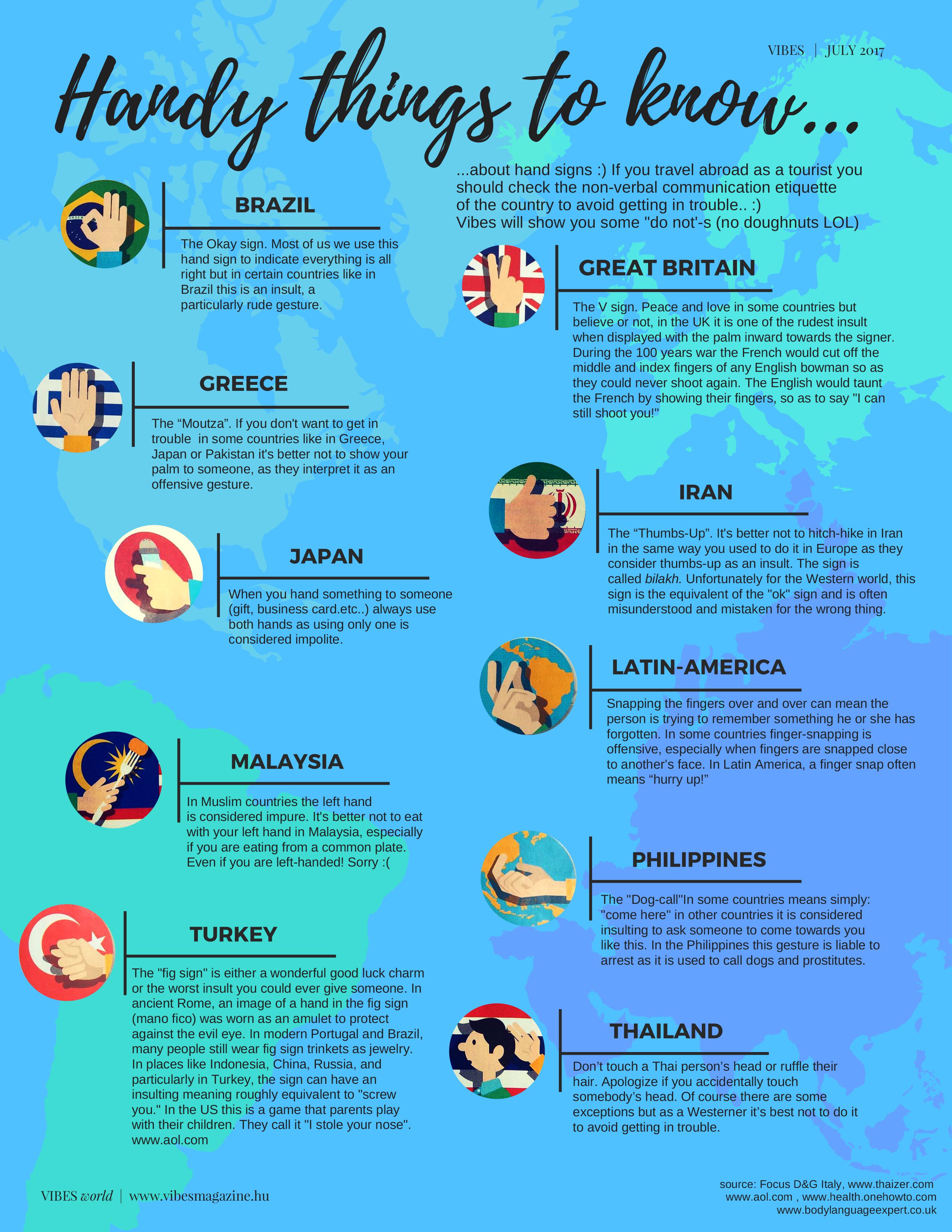