Lena Dunham : Not That Kind of Girl – Book review

Lena Dunham : Not That Kind of Girl – Anna’s reading challenge

Last month I wrote about Alexa Chung’s autobiography , “IT”, a curious book of a fierce female figure and this month I am bringing you yet another autobiography of another woman who could not be any more different than Alexa. The book is titled ‘Not That Kind of Girl’ and is written by Lena Dunham.
You might know Lena from the TV series, called ‘ Girls’ which in its six years managed to achieve more for women than Sex and the City in its long career did. Lena is not only the main character of the series, she is also the writer of it. In ‘Not that Kind of Girl’, while she experiments with her writing skills in another medium, her characteristic voice remains the same. 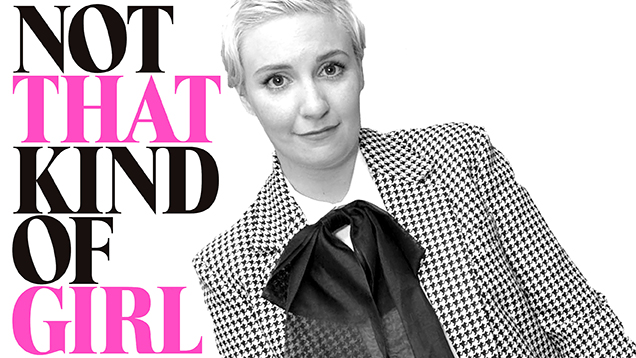 The book has various major chapters: love, body, friendship, work and the ‘big picture’ and the subchapters mostly evolve around certain theme such as girl crushes, death or diets. Similarly to Alexa’s IT, the stories are not in a chronological order, they keep jumping accross the timeline throughout the book. However, this is as far as we can compare the two books. While Alexa still holds the role of a semi-mysterious Femme (with a  capital F!), Lena overwhelms the reader with her numerous intimate stories. She lets you in to her memory of her failed relationships, her insecurities and this list goes on endlessly. I believe I prefer her stories to Alexa’s because they are less like a manufactured piece of art and more of a genuine portrayal. Even when we read over Alexa’s heartbreak, which is a very private matter, there is a feeling of a distance. Lena’s bad times are different: they shout insecurity and convey the crushing feeling of the world overcoming you and this honesty is what makes the book more real. Because we often wish we could all be Alexa’s- confident, clever and beautiful but in those dreams we forget to appreciate our unique selves. And what Lena does is courageously revealing her flaws to the millions of readers and consequently encourages us to acknowledge and embrace ours, too because these are what makes us into what we are.

And that is what female celebrities are ought to do: set an authentic, ‘make up’-less example for us so we would be relieved from the millions of facelifted stories and images we encounter daily. Once again, this is what she does when she recounts her memory of how she was sexually assaulted.  This is a topic that many women are afraid to speak of and I honestly hope that with her setting an example, maybe women will follow her lead and talk about their own abuses. This would be important because these matters have to be talked about on an individual and on a community level. This way the victim can feel that she/he is supported and the community as one can fight against such violations.

“When someone shows you how little you mean to them and you keep coming back for more, before you know it, you start to mean less to yourself.”
― Lena Dunham, Not That Kind of Girl

Next to these serious topics, there are lighter, random ones, too. For example in ‘Igor: Or, My Internet Boyfriend Died and So Can Yours’  not only does she tell how she chatted with Igor but also her first relationship with computers. Even though these stories are amusing, they are rather excessive. Lena wants to show herself in its totality and that also means countless childhood stories. It is as if Lena’s editor was not able to pull the break on the overflow of her personality.  Luckily, many of these do not correlate and you can skip a chapter if you feel like it.

If you choose to read the book, you will see that it is not perfect. It can be too much, too self-indulgent but it takes a step in the direction people should orientate themselves: breaking down the still existing taboos around femininity and doing that in our own way.