December is always an exciting time with lots to do: family, presents, cookies, the Christmas tree. But December is also a very important time in the film industry: all over the world movie theaters start showing potential Oscar nominated movies. Oscar season is officially ON. But don’t worry not all movies will be dead serious, and instead of four this month we have five to present. (If you are interested in potential Oscar nominated movies, look for the stars.) Whichever you will check out, just don’t forget the popcorn. 🙂

1. Dec /1: Allied
Robert Zemeckis brought us great movies such as Forrest Gump, Cast Away or Back to the Future, and this one shouldn’t be any different. The movie takes place in the II. World War and the main characters are spies. One just doesn’t know which side they are on. The chemistry between the two actors seem mesmerizing, but why wouldn’t it? Ultimately Marion Cotillard and Brad Pitt are extremely talented on their own already!

2. Dec/8: Office Christmas Party
As people who work in an office this is a must-see! I suppose Jennifer Aniston (as boss!) and Jason Bateman will be entertaining as always and the rest of the crew seem like fun characters. Go check this one out if you love a good party or if you would like to watch a light movie during the Christmas gift hunting, because it sure appears to be entertaining. But don’t be surprised: alcohol and craziness is sure to be involved (I meant in the movie of course ;))!

3. Dec/15: Rogue One: A Star Wars Story
I just love the fact that for the next four years I am able to buy a ticket and watch a new Star Wars movie in December! The world of Star Wars is fascinating with always something new to show, talented actors, beautiful sets and great visuals. Now this is a standalone movie which tells the story of the rebels who stole the plans of the Death Star – an important story line in the original three movies. We even get to see Darth Vader again! I sure hope to hear the original theme tune, when he appears on scene. 🙂

4. Dec/22: Collateral Beauty
Just to start off with the most eye-catching fact about this movie: the incredible line-up! With actors such as Will Smith, Helen Mirren, Kate Winslet, Edward Norton and Keira Knightley (just to mention the main cast) Collateral Beauty seems very promising. Not to mention that the trailer looks magical showing a man looking for answers by no other than Death, Love and Time after a terrible loss. And he receives surprising answers, when the three come to meet him in person.

5. Dec/22: La La Land
Who said musicals are outdated and old fashioned? Well definitely not Emma Stone and Ryan Gosling! They are the stars in this movie that plays in the magical city of Los Angeles. They are both struggling to make it to the top and always keep running into each other in the funniest of ways. And they sing and dance through the city! On a personal note: the director (Damien Chazelle) is one of my favorite ones who also wrote the script. Let’s hope the movie manages to surpass all the high expectations! 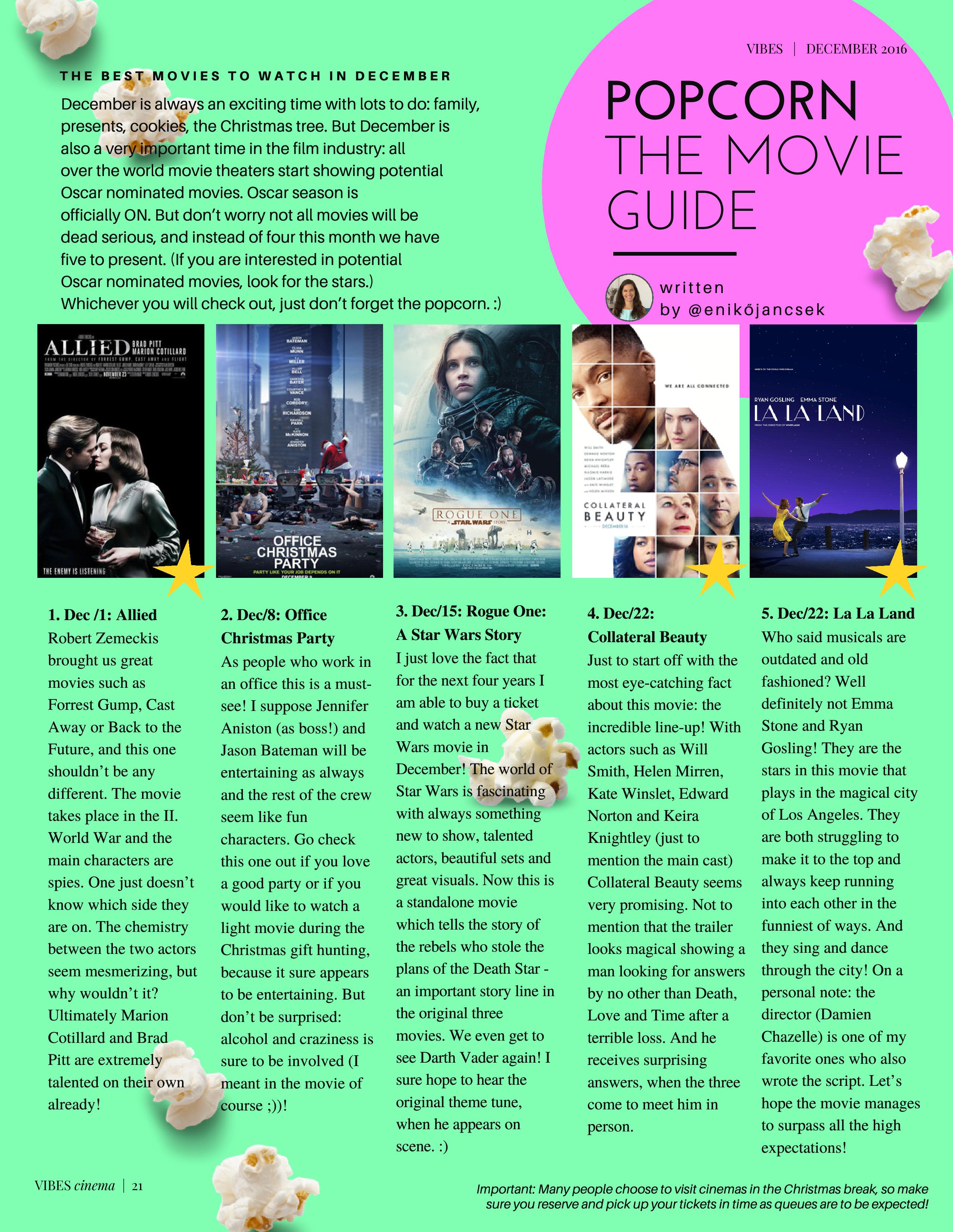